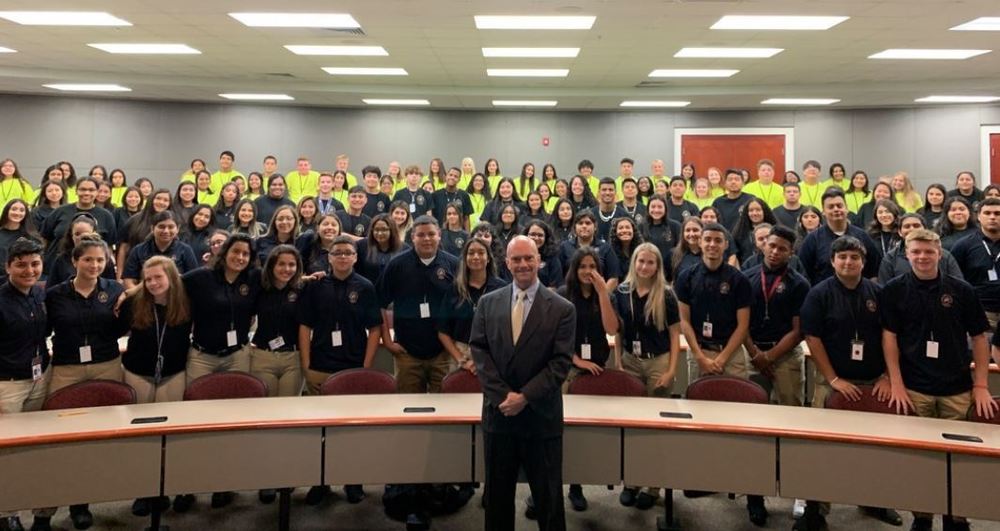 The Springdale High School Law Academy would like to thank David D. Phillips of the Springdale City Attorney’s Office for coming to speak to our Academy about his experience serving in the Pentagon on September 11th, 2001.

His words will forever be remembered by our students.

(Quotes from his story to the students.)

“Everything went vividly yellow.” “Get down. Get down.” “It felt as though the building was picked up and dropped.”

“My friend (MAJ) David Richardson jumps on top of me.”

“In that moment, the hand of God had wrapped himself around me.”

“Flame in the corridor.”

“Corridor appears to my right.”

“I knew I was gonna live.” “ I walked outside and took a deep breath of air.”

“Car on the road. It had a piece of an airplane in the windshield.” (He had worked aircraft crash scenes before.)

“For a brief moment, no one else came to our immediate area. I noticed some medical personnel treating an injured person near highway 27. After what seemed like minutes, but was probably only a few seconds, some walking injured began to appear from the impact hole in the building… The next person I noted to emerge from the building was a DPS officer who was single-handedly carrying an injured woman from the building….. He had obviously been carrying her for some distance so I offered to help him carry her the remainder of the way to a gathering point. He nodded, so I initially sought to take her from him, but he would not let go. So we both carried her to a safe location….. I was unaware at the time, but an ABC News camera filmed us carrying the lady out of the building. I was also unaware that I had reentered the Pentagon through the point of impact until I saw a copy of the newscast years later.”

(Student Questions) Did people start leaving the Pentagon when the twin towers were hit?”

Student question, “How did your perspective change?”

“Every day after, was extra.”

Thank you David Phillips for sharing one of your Extra Days with our Law Academy students.